In preparation for Safer Internet Day (SID) 2020, the Danish Safer Internet Centre (SIC) held a conference on sharing and manipulating images and videos online. During the conference, young people and experts shared their thoughts on the theme. Afterwards, the SIC published information and lessons from the conference.

On Monday, 27 January 2020, in preparation for Safer Internet Day, the Danish SIC (Media Council for Children and Young People, Save the Children, Center for Digital Youth Care) held a conference on manipulating and sharing images and videos online, and the new creative possibilities and serious challenges it poses to young people.

More than ever, we share and manipulate video and photos; but what does this mean for children and young people, who are usually the first to try new technologies? The conference, which was completely sold out, focused on this particular theme, in an attempt to open up a dialogue between those who work with children every day: teachers, school leaders, crime prevention workers, policy makers, NGOs and many more. 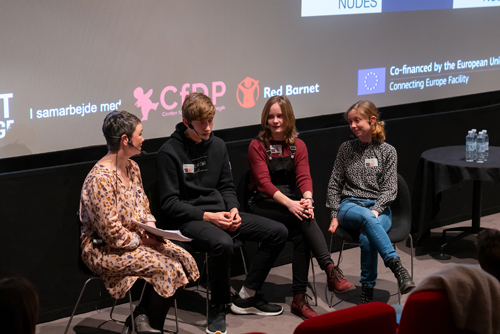 Chair of the Media Council for Children and Young People Stine Liv Johansen presented the conference. In her opening statement, she stressed that parents and other adults must take responsibility and help children develop critical thinking when it comes to the manipulation of images. The opening statement was live streamed on Facebook. 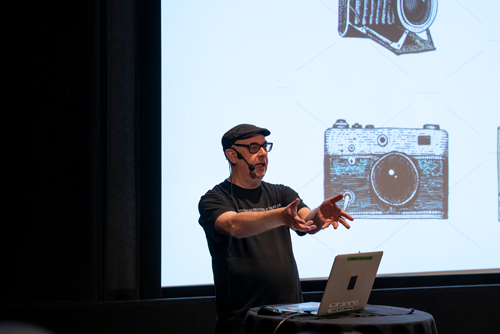 Chris Pinchen held a keynote speech with the title "The fun, creative, anarchic use of digital media and the dilemmas they cause". In his speech, he elaborated on both the positive and the negative sides of the accessibility of video and audio manipulation software. 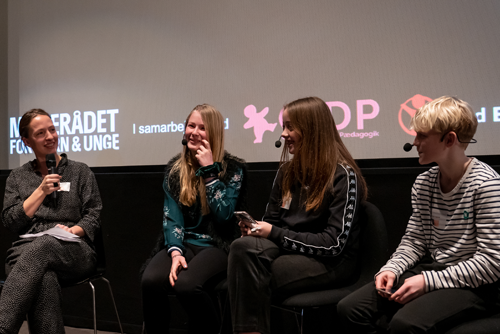 Interview with Carl, Freya and Melanie from the youth panel. Photograph: Bjørn Enevoldsen

Afterwards, six members of Save the Children and the Media Council's Youth Panel participated in an interview and a live demonstration of a series of photo and video manipulation apps. One panellist showed how easily he could manipulate images of two members of the audience, so they appeared as kissing.

As part of the conference, a representative from Save the Children interviewed a young woman, whose ex-boyfriend had shared explicit videos of her online. She stressed how incredibly important it is that adults engage in an open-minded discussion with young people on sex and image sharing, before everything goes wrong. As she told her story, the audience fell silent, and after the session, it became clear that she had made a huge impression on everyone who was present.

The conference ended with a panel discussion with four participants, who in different ways work with digital media. One of the participants, Associate Professor Marlene Charlotte Larsen works with young people's use of digital media, and her advice was clear: it is of utmost importance for adults to have a dialogue with children about what they do online and which platforms they use.

In order to throw light on the subject from as many angles as possible, the speakers also included a Danish influencer with more than a million followers, a lawyer and a psychologist.

The response on the day of the conference was overwhelmingly positive. Members of the audience participated actively in debates during the day, and the many discussions continued during coffee- and lunchbreaks throughout the day.

On Safer Internet Day 2020, all learnings from the conference were published (in Danish) on the website of the Danish Media Council for Children and Young People, and a series of videos with different segments of the conference were published on YouTube. Among other things, the Media Council published an interview with Chris Pinchen and an article with fact on video and image manipulation.