Spain joined the recent global celebration of the 2017 edition of Safer Internet Day (SID) with a series of initiatives to raise awareness about the importance of being part of the change for a better internet, with a remarkable impact.

Internet Segura for Kids, is4k, is run by the National Institute of Cybersecurity - INCIBE (www.incibe.es), and it is also focused on the coordination of efforts (between MINETAD and its dependent entities INCIBE and Red.es) and collaboration with all the agents working in the field of protecting minors online in Spain.

is4k's blog contains a summary of the main actions and echoes the impact of the centre's launch, some of which are outlined briefly below.

The Minister of Energy, Tourism and Digital Agenda led the institutional event and outlined the next steps in the deployment of the Spanish government's strategy in this area, in which the creation of the Safer Internet Centre is included. This strategy was completed with the vision of other Ministries involved - that is, Ministries of Justice, Interior, Education, Culture and Sport and Health, Social Services and Equality - represented by their Secretaries of State.

Secondly, public representatives presented the action lines, projects or initiatives that are being carried out or have repercussions nowadays, which exemplify the commitment in the Spanish public sector to face the risks that arise in the relationship of children with the internet and ICT (information and communication technology), and to improve this experience.

After this, representatives of various groups - young people themselves, families, educators, health professionals (e.g. pediatricians), workers from pro-child organisations and the professionals who provide digital services and tools for children - took part in a roundtable entitled "The voice of the groups involved". This roundtable had the objective of deepening the vision of each one on the challenges that society faces in the construction of a safer internet for Spanish children and young people, and its role to materialise the change proposed by the theme of Safer Internet Day 2017 – "Be the change: Unite for a better internet".

The event ended with the awarding of SID 2017 prizes.

On 20 January 2017, the Cybersecurity Mannequin Challenge Contest was launched by INCIBE. The aim of the contest was to encourage educational centres to join the Safer Internet Day 2017 campaign by creating a video following the popular Mannequin Challenge model. The video had to contain an awareness message about the safe use of the internet, along with the SID 2017 logo and hashtag.

The top 10 videos were awarded with a cybersecurity training session for students and educators in their respective centres during the 2017/2018 school year.

In addition, the top three winners were awarded with gift vouchers for technological material. The winning videos were shared on INCIBE's social networks as part of the SID 2017 campaign. 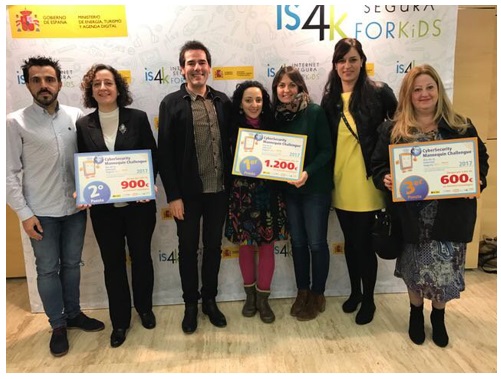 Cibercooperante of the Year 2016 Award

This Honor Distinction recognises public personalities, such as Vicente del Bosque - the ex-manager of the Spanish national football team, who are sensitive to the importance of awareness in cybersecurity and responsible use of the internet, and altruistically supports the Cibercooperantes Programme collaborating in its dissemination. Vicente del Bosque collaborates to spread the best values to be safe and secure on the net. 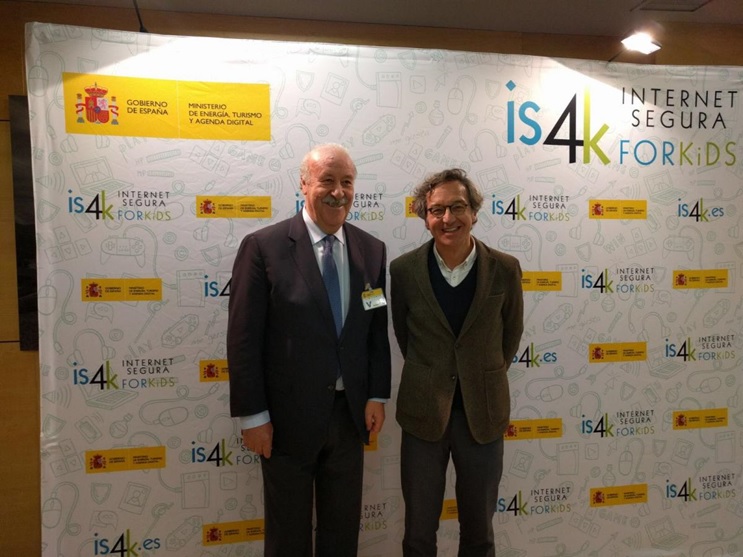 Thanks to the collaboration of the programmes Cibercooperantes and Scholar Sessions, in order to celebrate SID 2017, more than 70 talks were officially held on 6-7 February in primary and high schools across Spain, in which more than 4,200 pupils and teachers learnt about guidelines and measures for privacy and safety online.

The subjects of the talks included:

Dissemination of SID 2017 through social networks

INCIBE, the entity in charge of operating is4K, also organised a special dissemination campaign through its Twitter and Facebook accounts. INCIBE asked its followers to join the SID 2017 campaign by using the hashtag #SID2017 (the official hashtag of SID which is used worldwide) and #MeUnoAlCambio (a hashtag that freely translates the motto of this year into Spanish).

Lots of people collaborated with this campaign by publishing a tweet or post with a sentence, image or video with an awareness-raising message about cybersecurity, the safe use of ICT or mentioning some action that was being carried out during the celebration.