The ninth national Media Literacy Week (MLW) celebrated a better and safer internet from 8-14 February 2021, including Safer Internet Day (SID) which took place on 9 February. Thousands of children, young people and adults were reached before and during the campaign week with well-planned and unique campaigns designed and implemented by several organisations.

In Finland, safer internet issues fall within the concept of media literacy and, as such, the traditional Safer Internet Day is included in Media Literacy Week. The week is organised by the National Audiovisual Institute (KAVI) and it is part of the awareness-raising work done by the Finnish Safer Internet Centre. 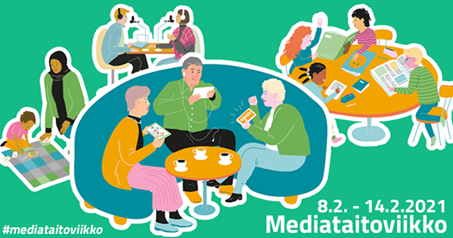 The aim of Media Literacy Week is to advance the media literacy skills of children, young people and adults as well as to support professional educators, guardians and other educators in their important media education tasks. The week was planned and carried out in co-operation with over 40 partner organisations from all sectors of society, from governmental organisations to NGOs and businesses.

Together with the cooperative organisations, altogether 33 campaigns, events or materials were conducted or published for Media Literacy Week. These included, for example, a test about digital footprints, a video about what the internet means for elderly citizens, podcasts and articles about small children as media users, two games focused on copyright issues, and a news literacy material for adults.

Altogether 2,100 professionals registered for the week, most of them representing teachers from early childhood education, basic education for children under 12 years, and librarians. The professionals reached approximately 200,000 persons during the campaign period.

Media Literacy Week does not have one specific theme, but each year concentrates more deeply on one focus group. This year, communication and visibility was especially targeted at adults and the elderly. Next year the focus will be on special groups such as children and young people in vulnerable situations or learners with different challenges.

One of the greatest things about planning Media Literacy Week in cooperation with over 40 organisations is the amount of target groups which can be reached. Most of the Media Literacy Week partners represent organisations aiming their messages to children, young people, parents and teachers. Also, adults and the general public are taken into account each year. All resources and events created for Media Literacy Week can be found on www.mediataitoviikko.fi (in Finnish, some materials in Swedish).

One of the first resources created for the campaign was the Media Literacy Magazine (Mediataito), which is both an information publication as well as a journalistic approach to present new and topical materials and ideas concerning media literacy and media education. More than twenty partners provided material for the magazine and it was sent to professionals who had registered for the week in early December.

Once the week of events, local contributions and actions, as well as active communication via social media had concluded, both participants and organising partners had their say on how well the week was organised and what could be done better next year. Comments from the survey included:

“I think it’s important to teach children to be media creators, not just users of different devices.”

“The materials are great. There are just so many of them, it’s hard to choose which one to use. It would be nice if you could make complete lesson plan units.”

“The Think and Challenge campaign was amazing. It was clearly directed for youth, participation was easy, it supported contemporary adolescents’ media use, was a current topic, and clearly focused on young people (not something for children). More of these!”

Professional from youth centre or other youth work

Focus on misinformation for Safer Internet Day in Estonia

The traditional Safer Internet Day (SID) celebration in Spain was marked, for the first time, with an online event due to ongoing COVID-19 restrictions. INCIBE, the coordinator of the Spanish Safer Internet Centre (SIC), hosted the event over two days, 9-10 February 2021, under the slogan of “Together for a better internet: more connected, more secure”.